What are the top property hot-spots around Colombo?

A recent study done by LankaPropertyWeb reveals the average residential land prices around Colombo and which areas the prices have gone up. In one of the most comprehensive studies done on land for sale asking prices (for-sale prices) around Colombo listed on their website, the suburbs of Nawala, Dehiwala and Rajagiriya have topped the list for the highest per perch average price. The cheapest areas for land within proximity to Colombo is Ingiriya, Padukka & Kosgama.

While the above figures provide some interesting facts, it won’t surprise many as the prices tend to obey the proximity rule – where prices closest to the main city are the most expensive and as you go further away the prices decrease.  The ‘Heat Map’ below illustrates the average land prices in each area. 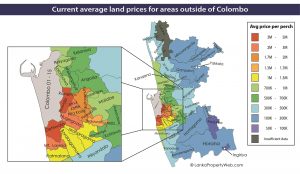 However, interestingly, even though the land prices in the country has been increasing, the rate of year-on-year increase has slowed down in the last 3 quarters, with the last quarter recording a 9.26% increase, according to the House Price Index.

Colombo city has also shown similar characteristics to the national land prices, with Y-O-Y price rises slowing down to 8.5% in the last quarter, and rest of the Western Province saw average land prices rise by 13.5%. While land prices will continue to rise overall, and remains as a top investment, it needs to be seen if the slowdown in the price increase is temporary or will become the future trend.

In terms of price increases, areas further away from Colombo have shown significant increases with Veyangoda, Mirigama and Hanwella showing above 50% year-on-year increases. Closer to Colombo, Thalawathugoda and Thalahena have shown the best increases with increases between 40-50%.

It’s worth noting that these values represent statistical average prices for that whole area and prices within the area will have its own variances, such as land close to main roads or junctions being expensive and above average. If you wish to obtain more accurate prices for your land or neighbourhood prices, then you should view land for sale listings for that area, check with an estate agent or valuer in your area.

The number of Deeds registered in a given region would be a good indicator of the number of property transitions in that region and how buoyant the market in that area is. Recent Deed registration statistics released by the Registrar General’s Department (for 2012-2016 period), shows that the number of deeds registered in Western Province and each of its districts has grown year on year, however the growth has started to slow down.

2016 has seen 472,316 property transactions / Deed registrations in Western province, with bulk of it coming from Colombo & Gampaha Districts. There was a 6% increase in registrations in 2016, compared to 11% in 2015. 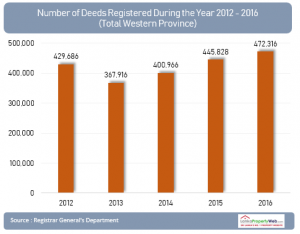 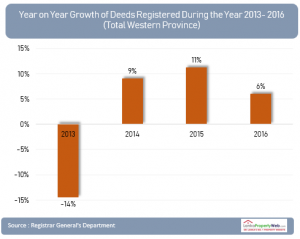 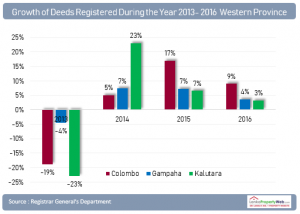 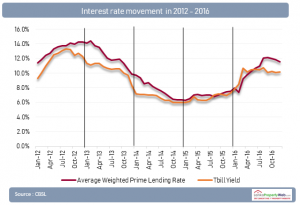 This would have discouraged the real estate buyers to delay their investment. Once the interest rates declined to its lowest levels, it can be observed that the activity increased in 2014 & 2015. Once again, the actives were contracted in 2016 with the increase of interest rates.